The Council Secretary General Chief Younge , presenting a certificate to the minister. 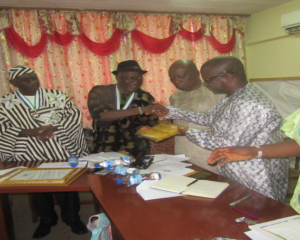 A group photo of MLGRD Staff and some members of the council. 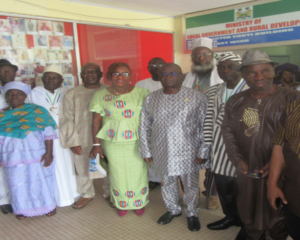 Staff of MLGRD and UNPD pose for the press

Members of the Council of Tribal Headmen in the Western Area have showered praises on the Minister, Deputy Minister and Staff of the Ministry of Local Government for their unwavering commitment to restoring dignity and respect to their chieftaincy institution and promoting good governance in the country.

Speaking during a courtesy call on the recently appointed minister and deputy minister of Local Government and Rural Development, the Vice Chairman of the council, Chief Sahr Gbekie, congratulated them  on their new appointments and pledged their determination to uphold the tradition of oneness, peace and unity so as to promote socio-economic development in the country.  He described their institution as a ‘’very formidable’’ one which he noted, has started since the colonial era. He thanked the President, HE, Retired Brigadier, Julius Maada Bio for recognising and awarding the prestigious Order of the Rokel to one of their members, Chief Mathiew Jibao Young. He described the Ministry of Local Government as one of the most important ministries in the country and assured that they will work in collaboration with Paramount Chiefs to promote development in the country. He outlined a number of challenges facing them and appealed to government to address issues relating to their welfare and empowerment so as to enable them effectively perform their roles and responsibilities including the enforcement of law and order as well as revenue generation. The Secretary General of the Council, Chief Mathew Jibao Younge who also acknowledged the role his organisation and the ministry have been playing in promoting peace, unity and development in the country appealed for a representation of Tribal Heads in Local Councils. He later, presented by-laws formulated by the council to the minister as a mark of their effort in complimenting government’s effort in promoting good governance.

Responding, the Minister of Local Government and Rural Development, Tamba John Sylvanus Lamina, described their visit as a manifestation of their willingness to work with his ministry. On behalf of the President and government, he expressed thanks and appreciation to the chiefs for the visit. ‘’Our work will not be complete without your support’’, he said. The government, he added is striving hard to maintain law and order and called on the chiefs to administer justice in accordance with the law, show respect for their subjects to ensure peace and unity and help curb lawlessness in their respective localities. On the issue of traditional healing, he acknowledged the role of the practitioners and stressed the need to establish a National Traditional Healers Council as a means of regulating the practice.

The minister also expressed the need for a forum that would identify roles and responsibilities of local authorities and disclosed plans to introduce guidelines that would address the activities of Secret Societies, following a ban on their activities. He went on to remind the chiefs about the just- ended launch of the Review of the Local Government Act 2004 and Decentralisation Policy 2010 and entreated them to make their submissions and give full support to the initiative. Illegal Sand mining he said has the potential to destroy the environment and admonished all to do it within the ambit of the law in collaboration with Local Councils.

He pledged government’s profound desire to promote good governance and issues that would address their wellbeing.  In her contribution, the Deputy Minister of Local government, Melrose Kargbo, expressed their desire to work with the chiefs to drive President Bio’s vision, geared towards the promotion of peace, prosperity, human capital development among others She said, break down in law and order and other societal ills contributed to the past war and called on the chiefs to help fight against problems such as gender-based violence, youth unemployment, rape and early marriage in their communities. The Permanent Secretary of the ministry, Mani Koroma who chaired the meeting, noted the existing cordial relationship between the Tribal Heads and Paramount Chiefs and looked forward to their support.