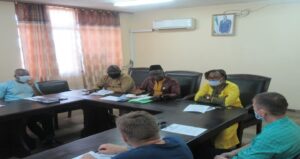 Fifty out of Two Hundred Dump Trucks which the Government of the Russian Federation had earlier promised to donate to the Government of Sierra Leone are expected to arrive in Freetown on Friday, 20th November, 2020.

This disclosure was made by the Minister of Local Government and Rural Development, Tamba John Sylvanus Lamina whilst welcoming representatives of the manufacturers, GAZ Group to a Strategic Sectoral Management Committee Meeting, held in the Conference Room of the Ministry of Mines and Mineral Resources in Freetown on Friday, 13th November, 2020.

The Minister recalled that following negotiations during President Julius Maada Bio’s visit to Russia, the Russian Federation through President Vladimir Putin, promised to donate the trucks to the Government of Sierra Leone as part of their of contribution to the its Waste Management Programme. He on behalf of government and people of Sierra Leone thanked the donors for complimenting their efforts and commended the manufacturers for expediting the process.

The Deputy Minister of Local Government and Rural Development, Melrose Kargbo also thanked the donors for the gesture and wished the visitors happy stay in the country. The Acting Permanent Secretary in the ministry, Ibrahim Sorie Kamara who chaired the programme, described it as a demonstration of the importance government attaches to the gesture and assured all of their determination to ensure the process is successful.

The General Manager, Sierra Leone Road Transport Corporation, Isaac Ken Green and Deputy, Paul Tucker, a representative from the Sierra Leone National Shipping Company and Daway Engineering and Construction Holdings which acts as liaison between the two countries also intimated the gathering about necessary modalities they have put in place to ensure successful delivery and use of the trucks.

Head of the Russian team, Lobanov Mikhail, expressed thanks and appreciation for the warm welcome accorded them. He pledged his company’s desire to provide high quality trucks and lauded the effort of stakeholders present for providing the enabling environment for them to operate.

To ensure sustainable use of the items, a team of three technical personnel from Sierra Leone is expected to attend a Training of Trainers Programme in Russia before the arrival of the trucks.