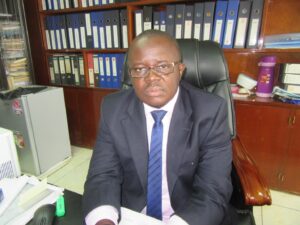 Mr. Alex Jusufu Bhonapha is the Director of the Decentralization Secretariat. He was appointed to this position on the 17th of September, 2018. Part of his cardinal responsibilities include: providing technical back stopping to the ministry responsible for Local Government and Rural Development, ensuring that the process of decentralization is driven forward and the President’s commitment on decentralization in his manifesto is achieved. He deals with policy issues of the ministry as well as legislation.

Director Bhonapha is a seasoned Local Governance Practitioner with empirical knowledge in the administration of local councils. He has undertaken so many consultancies for reputable institutions on gender and children’s issues. He was the Chairman of the Kailahun District Council from 2012-2017.

He is a Barrister and Solicitor of the High Courts of Sierra Leone. He is also an Associate Lecturer at the Njala University since 2010.

He remains the youngest recipient of the highest Rokel Order. He was decorated as Grand Commander of the Order of the Rokel (G.C. O.R.) on behalf of Sierra Leone Students in 2007. He is a Justice of the Peace. (J. P.)

He is a faithful worshiper of God as a Christian. He is married to Mrs. Mojama Dabisatu Alex Bhonapha and they have four children.