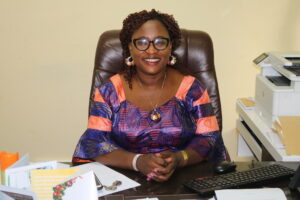 Completed primary and secondary education in Bo and got her undergraduate degree at Njala university college.
She was a teacher at both the Methodist girls high school and technical institutes. Worked for the Disarmament, Demobilization and reintegration of Ex-combatant (DDR) program after the civil war. Later secured a commonwealth scholarship to study in the UK at London South Bank University where she graduated with a distinction in International Development Studies.
She then returned home to contribute to national Development in 2007 and started working with UNWomen as the program specialist and later became the acting country representative.
She also went international and worked with UNDP in Somalia.
She returned again to Sierra Leone to contribute to National Development, she was part of the governance transition team after President Bio won the election in 2018. His excellency fully aware of her capacity to help him deliver for this country made her to serve in his government, first as deputy minister of Works and Public Assets and currently she is our deputy minister of Local Government and Rural Development.