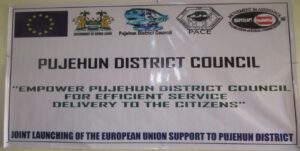 Residents in Pujehun and Kenema districts have expressed thanks and appreciation to the government of Sierra Leone and European Union for providing the needed financial support that would enhance the implementation of development projects in their districts. They made these remarks during the official launch of a project, titled, “Empowered Pujehun and Kenema districts councils for efficient service delivery to the citizens” under the “Support to Civil Society and Local Authorities for local development in Sierra Leone”, funded by the European Union. 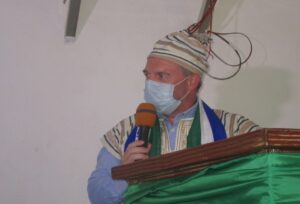 The main thrust of the project is to improve  councils institutional capacities to deliver their core mandates, ensure citizens in the districts are reached with improved and sustainable services in the sectors to agriculture, infrastructure development, water, sanitation and health, WASH on COVID-19, increase their revenue base through enhanced revenue collection, management and investments. 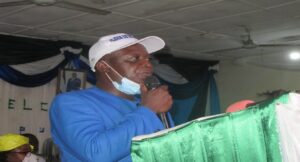 The district stakeholders present, including Paramount Chiefs, DICOVERC Coordinators, Mayors, Chairmen and traders showered praises on the Head of EU delegation in Sierra Leone for the support, amidst thunderous applause. The epoch-making events also witnessed drumming and dancing, presentation of gifts, skits by school children and adornment of the EU representative with colorful traditional regalia, (Contry Cloth) in appreciation of the gesture.

Full joy hope and expectations, the beneficiaries also registered their profound commitment to ensuring that the projects are successfully implemented.  Giving his Keynote address at the ceremonies, the Minister of Local Government and Rural Development, Tamba John Syvanus Lamina who also launched the project, described the events as great and memorable in the history of the two districts. He on behalf H.E. President Julius Maada Bio and government thanked the European Union for complementing their efforts. He said the presence of President Bio in the inaugural launch of the project in Bombali recently was a clear manifestation of his desire to ensure decentralization process succeeds. 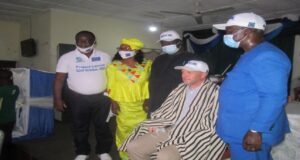 He referred to EU as one of the most dependable partners with it footprints everywhere with regards to development in the country. He said activities mapped out by local councils and CSOs were in tandem with the president’s vision and hoped they will meet the aspirations of beneficiaries, government and the donor. He catalogued a number reforms introduced recently by his ministry including the adoption of a policy which will soon be approved by parliament, formulation of a strategic plan, barometric verification of chiefdom authorities, development of property tax improvement of the welfare of local functionaries and recruitment of Chiefdom Coordinators to serve as liaison officers between central and local government and review of the Local Government Act.

He described chiefdom development as “integral” and stressed the importance of chiefdom authorities in the development of their localities. “The project is meant to make local councils buoyant and self-sustaining” he noted while calling on the beneficiaries and implementers of the projects to support the project and abide by rules covering its implementation. He pledged his ministry and line ministry’s commitment to monitor every stage of the implementation process and disclosed plans to harmonize the condition of service of local councils with those of civil servant to ensure effective service delivery. In his remarks, Head of the European Union delegation in Sierra Leone, Tom Venns, expressed his organization’s unwavering commitment to strengthening human technical and financial capacity worldwide.  Giving a brief historical sketch of the project, he said the project which values millions of Euros was conceived few years ago and implemented in six districts including the newly established districts of Karene and Falaba. Stating the purpose of their intervention, he intimated that he was very happy that they were implementing the project under a very strong decentralization policy. 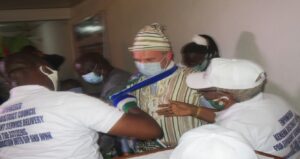 The project, he added is aimed at ensuring that there are strong administrations at district level that can generate their own revenue to have  sustained and long term development plans, train community mobilisers, health workers, promote food security through the training of farmers, provision of equipment and supplies to support the fight against COVID-19, rehabilitation of boreholes , markets with WASH and waste management facilities, effective maintenance strategies and raise awareness on gender issues among others. “Women must be empowered to leadership positions” he challenged while underscoring the need to adopt the Public Private Partnership approach to ensure project is successfully implemented. Devolution, he opined, becomes reality when local authorities are able to provide useful services for their citizens. Ambassador, Venns also emphasized the need for transparency and accountability in project implementation, pointing out that implementation of the project through Local council and CSOs is one of the most appropriate ways of delivering services to local communities. Successful implementation of the project, he said, depends on how the funds are utilized and hoped those giving the onus to implement will observe the project’s guidelines. He described decentralization as the bedrock of any democratic systems, adding that it is the responsibility of communities to determine how to develop their localities. While thanking the districts for fighting against COVID-19, he reminded them of its dangers and entreated them to continue observing protocols surrounding the pandemic.

He lauded the local councils and CSOs for their collaborative efforts and extent of collaboration and cooperation between stakeholders and urged all to support activities contained in the grant contract documents. He thanked government for their relentless commitment to strengthening the decentralization process in the country in accordance with the ministry of Local government strategic plan and pledged their continued support.

In his statement, the minister of Development and Economic Planning, Dr. Francis Kai Kai, described the project as very unique, special and wonderful, pointing out that it was the first time in the history of the districts to receive such a huge amount of funds directly through local councils and CSOs for the implantation of a development project which according to him demonstrates government’s avowed commitment to promote the decentralization process.

He reminded residents about the deplorable condition of the districts in terms of development and urged all including, members of parliament, Paramount Chiefs to make the best use of the opportunity.

The project, he furthered is part of his government’s Medium term Development Plan and disclosed plans to establish districts  coordinating structures, comprising key stakeholders to ensure the project is fully implemented.

He encouraged Local councils, NGOs; CSOs to support Community Based Organisations to enable them undertake development activities in the districts and pledged his ministry’s support especially in the area of monitoring. Presentation of Project Overview by Chiefdom Administrators in Local councils and Grant Components by CSOs, followed by visits to  project sites, formed part of the programme.